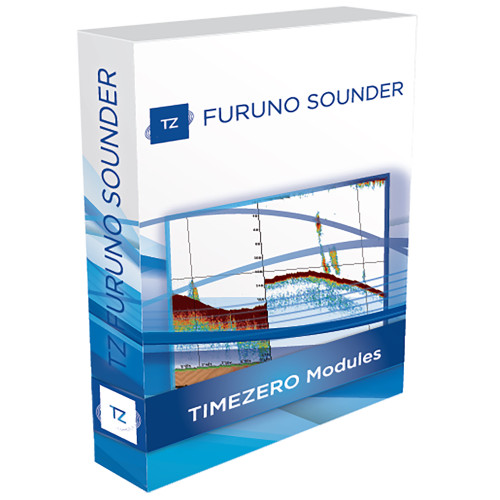 Maximize navigation security and your fishing potential by integrating TIMEZERO software with an Ethernet-based Furuno Sounder. The Furuno sounder models DFF1, DFF3, DFF1-UHD, BBDS1 or FCV1150 are natively compatible with TIMEZERO software, and offer many functions that act as real aids to navigation and fishing, for both professional and recreational users.
Recreational users will appreciate the ability to display the sounder image directly on their computer screen and have full control of the sounder from their computer.

This hardware integration is critical to professional fishermen, allowing them to locate fish and save marks to the sounder image.

Historic Data
TIMEZERO stores the data received in the past 3 minutes (approximately). You can then easily go back and identify echoes that seem interesting.

Bottom Discrimination feature available with the FURUNO BBDS1 and DFF1-UHD only:
The bottom discrimination window can be displayed from the Sounder workspace. This information is helpful in spotting the rich fishing ground where you can boost your catch of the day.

Bottom components:
The BBDS1 and DFF1-UHD sounders classify the sea bottom into the following categories of sediment: mud, sand, gravel, and rock. This is achieved by analyzing echo characteristics from the bottom components such as particle size and hardness. In addition to providing the seabed information, they also display its level of certainty in relation to the type of sediment that is shown in your software. This information appears in the discrimination window and lets you know how reliable the data is in particular areas.

Bottom Component Localization:
Rolling the cursor over the bottom discrimination window will automatically display a _red cross_ cursor on the Chart allowing the user to geo-localize any bottom component.

Bottom Hardness:
As the BBDS1 and DFF1-UHD receive bottom hardness data, it is also possible to record this information within the software, along with the bottom depth. You can then display bottom hardness on your chart using a color spectrum, or just in black and white. These colors will indicate the softest bottom (mud) to the hardest bottom sediment (rock).

Connection of these sounder models is very simple - the compact network sounder unit connects directly to your PC via a single Ethernet cable.
(*)Without adding the Furuno Sounder Plus Pack to TIMEZERO software, you will only be able to share standard NMEA0183 or NMEA2000 digital depth data between the Sounder and TIMEZERO.