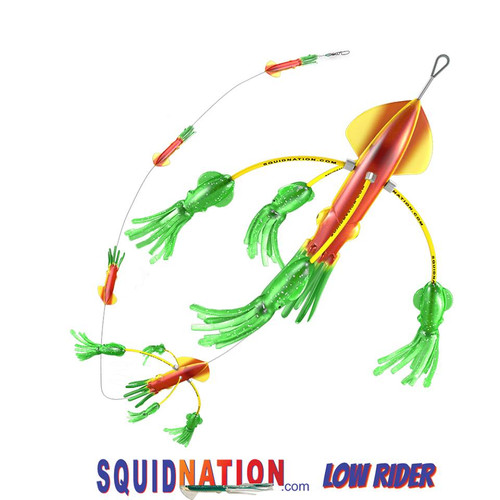 The Low Rider Flippy Floppy Chain is 4 armed Flippy Floppy version of the original Flippy Floppy Thing designed for smaller vessels that troll their teaser directly off a rod tip or low on riggers. This rig was originally brought to us by Capt Mark “Hammer” Hill who said a version of this rig was highly successful for him in Venezuela in its hey day. When legendary lure maker Peter Pakula saw it he got excited as he had an idea and modified it for the Australian small boat market. The idea is to create a greater commotion in the front Low Rider Squids and have the trailing back predators chasing the commotion. The Low Riders more accurately show what a showering school looks like when being preyed upon. With some of side squids showering on the surface, some taking to the air and some going deep in a chaotic feed scene. Nothing excites a predator more then its prey feeding which leave itself vulnerable for an easy attack by the predator. This versatile teaser can be trolled weightless as a semi-surface teaser chain or add a cigar weight in front of the chain and it trolls nicely sub-surface as a small dredge bar. Start Low Riding today and watch em pile in.