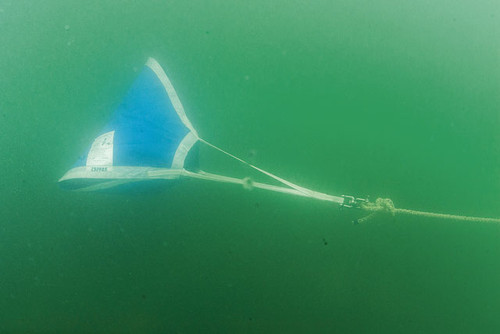 Looking for a safer way to control your boat’s speed? Consider investing in a PARA-TECH DELTA Drogue. However, the proper use of a Sea Anchor off the bow should not be confused with the proper use of a drogue off the stern. The dichotomy between the two concepts, along with documented case histories, has been combined into a publication entitled the Drag Device Database. Sailors planning extensive offshore passages should visit the website for a more in-depth study of the different applications of both devices.

A speed-limiting drogue is towed off the stern. Its purpose is to (a) limit the boat's speed, (b) reduce her angle of yaw and, (c) provide for steering assistance in strong seas. You can and may have to steer the boat with the drogue in tow.

However, there is one caveat with any speed-limiting drogue: the same low pull that allows for steering control may also allow the boat to broach, capsize, and/or pitchpole in the heaviest seas. The forces that pitchpole yachts are formidable enough to yank the drogue through the water, and may even be enough to throw the boat end-over-end. Sailors should be aware of this caveat and make allowances for it in the course of their decisions at sea.

Warning: In all likelihood, the insufficient drag of a speed-limiting drogue will not prevent pitchpole in the heaviest storms, especially those packing ESWs (Extreme Storm Waves), rogues, and Three Sisters-type developments.

The PARA-TECH DELTA Drogue uses the "guide surface principle." The design is a triangular delta shape that provides strong, uniform flow separation at all leading edges. Shape retention is achieved with the pressure of the water inside (similar to the "Ballute" drogues used in aerospace applications). The relatively small mouth at the leading edge makes it extremely unlikely that one will get turned inside out (a problem associated with large cones and small parachute drogues). Also, the three ears of the DELTA Drogue have the effect of increasing drag as speed increases.

The PARA-TECH DELTA Drogue is extremely simple in design and construction. So simple that it is made from heavy duty vinyl coated material.